Troubling Virtue: Engineering and Poverty in the Age of the “Down and Out” 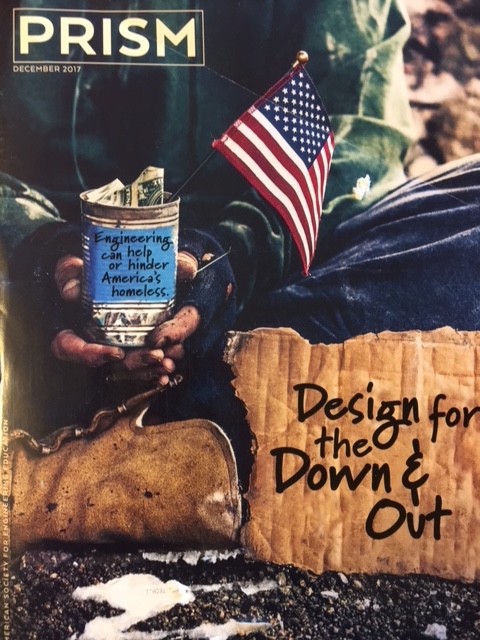 December 2017 cover of Prism, the magazine of the American Society for Engineering Education.

The huge wealth disparities and widespread racism, homophobia and ableism that help drive homelessness in America are not mere background conditions against which engineers may decide to take up more and less “caring” design projects. They are injustices to which we can instead be fully accountable. As a close look at one recent magazine cover shows, the familiar formula of Sympathy plus Technology does not necessarily add up to Change…

We can probably agree that we are not doing as much as we can to address poverty in America today. Federal lawmakers and executive orders are gutting health care and education provisions that have previously helped support the less well-off in our nation, and cities struggle with the results of those cuts. The concentration of wealth at the top increases, and the very definition of a “healthy national economy” includes corporate reliance on outsourcing; automation; and temporary, uninsured, low-wage workforces. Women, people of color, LGBTQ individuals and other minorities suffer disproportionately in this economic landscape as do veterans, disabled people and the elderly.  We are living in an era of deeply inhumane governance and pronounced discrimination, and it seems important to us to ask about the difference between mere concern regarding this growing economic and social violence, and real accountability.

We are thinking about these questions in the context of engineering because Prism, the magazine of the American Society for Engineering Education, has put the matter of homelessness on their December 2017 cover, shown above. (The cover features a person seen from the neck down, with dirty hands, seated directly on the pavement before a tin can holding a crumpled dollar bill and a small American flag.) This cover implies a relationship between engineering and poverty that we find unsettling, and perhaps reflecting on the image can help us move from concern at least a bit closer to accountability.

First, let’s talk about Prism’s cover headline, “Design for the Down & Out.” That description of homeless persons may induce a jolt of sympathy among readers but it is in fact discriminatory, ascribing to those without homes not simply the experience of being excluded from economic opportunities but also a naturally low status (“down”), marginal community positions (“out”) and above all, personal ineffectuality. Like many charitable projects in American history, this is a sympathy that marginalizes its subjects.

We are not talking about insincere approaches to helping the poor; we are talking about how unreflective sincerity can itself reproduce discrimination. Unlike earlier forms of elite charitable judgment that explicitly blamed the poor for their lack of resources (attributing poverty to individuals’ weak morals, weak genes, or both),  Prism’s imagery gives no obvious indication that the homeless deserve their discomforts. That little flag definitely strikes a note of deserved need: The steadfast patriotism of the pictured homeless person demonstrates their good faith in the democratic project that is America. The article inside, by Jennifer Pocock, actually mentions some significant political causes of homelessness. Yet let’s think about what comes across in the public face of Prism, a cover that is meant to incite engineers to open the magazine and think about poverty. There is no way that someone seeing this cover would imagine that homeless persons contribute intellectually, materially and socially to any context. Instead, we are asked to picture the impoverished as passive and ineffectual, literally waiting for the mercy of generous passersby.

Of course, as things stand many homeless people in the U.S. will not be able to obtain food or shelter without donations from the better off, and many are urgently in need of the care of others. Assuredly life on the street is often difficult and dangerous, and deinstitutionalization of the mentally ill famously expanded the ranks of homeless in America by leaving many unwell people with no real medical resources.  But it is still inappropriate to characterize homeless people as this cover does as diminished individuals in need of intervention.

So why do so? Perhaps because this characterization of the poor fits the idea that engineering naturally has only a narrow sort of social responsibility. This idea that technologies can unto themselves be caring leaves to other professions the address of structural issues such as depleted public housing, healthcare, and education, or increasing corporate greed; as well as racism, homophobia, and xenophobia, that have helped create this impoverishment. Consider the “staggering” levels of poverty and health inequities found among transgender Americans, including high rates of homelessness among transgender youth forced by their families to leave home. Our point is that these are not merely background conditions in light of which engineering can select its problems, more and less humanely; these are conditions to which engineering must be accountable. The “helping” modality so common in engineering service projects today not only puts the technological fix front and center as generous gesture but erects technological innovation and caring innovators as a screen that can hide an unjust society.  Students deserve a fuller and less self-consoling picture of their world.

The cover’s other bit of text notes that engineers can choose to “help or hinder America’s homeless.” And the contents of the article indeed contrast sleep-preventing city benches to engineers’ more positive material interventions in the lives of the poor: ways to “alert” unemployed homeless people to job opportunities (smart phone applications); help them “keep clean” (affordable ultra-hydrophobic menstrual cups); and otherwise assist people to “get out of poverty.” But each of those assisting technologies, while likely to bring physical or psychological relief to users, cast the experience of poverty as somehow based in individual bodies, not in the economic structures and collective decision-making that currently render suffering inevitable in America. While some of the educational programs described in the article grapple with legal or policy deterrents to reform (say, city policies that have prohibited the construction of permanent housing in lieu of temporary “squatter” communities), the overall sense given by the pathos of the cover and the celebration of design-as-caring serves conservative arguments against economic and social reform.

In reality, the most effective actions an engineer can take to end homelessness more likely lie in lending their time and talent to local citizen political action. To address the immediate crisis, engineers and others should advocate that resources be directed to housing first, and not housing alone but also a range of services that support physical and mental health. To address the root causes, engineers should work toward the goals of groups like the Poor People’s Campaign, addressing living wages, health care, immigration reform, and voting rights.

The aim of making engagements with impoverished communities attractive to engineering students and impressive for their future employers is not antithetical to real change, to accountability. We are excited that the ASEE sees value in covering these issues and about the prospect of STEM educational programming critically engaging with social justice issues. But whoever is crafting headlines and designing covers for Prism needs to see how highlighting “the problem posed by America’s half-million homeless” defeats such purposes.  The homeless do not pose a problem. Our acceptance of homelessness does.