The STEM Gender Gap: Persistent but not Puzzling 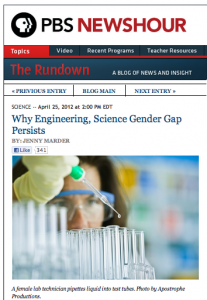 This week of science festivals around the nation has mostly been a very festive occasion, indeed (I, for example, learned at a “science cabaret” last night that Linneaus was obsessed with bananas). It has also brought forth welcome coverage of equity issues in STEM fields: the perpetually low numbers of women, minorities, and persons with disabilities in U.S. science and technology occupations. The correction of that under-representation partly justifies the festivals as efforts at STEM outreach and inclusion.

But in that coverage, my eye was caught by the very last point in a long article from PBS NewsHour by Jenny Marder this week, “Why Engineering, Science Gender Gap Persists.”

In this piece, Angela Bielefeldt, a professor of civil and environmental engineering at UC Boulder who has done some very interesting work on the topic, had the last word:

“The important thing to note is how long we’ve been at this,” Bielefeldt said. “The fact that we’ve made no tangible forward progress despite working on this for a long time is puzzling and depressing… and again, we’re not sure what the secret is.”

“Depressing,” yes. That captures it perfectly. But: “Puzzling?” And, “Secret?” I think that language may arise from a spirit of thoughtful inquiry, but set up too many listeners to shrug and move on. I wonder if we too often use a politely perturbed tone to direct attention to something that is really far closer to bigotry than mystery.

As I see it, the previous pages of the article laid out many causes proven by studies over the last 40 (!) years to have contributed to women’s under-representation in STEM classrooms and jobs. These causes range from documented sexism in teaching, hiring and promotion practices to, “…A lack of female mentors” and ”subtle discrimination or work conditions in which men talk in a way that women found disrespectful.” Those are findings produced not by some narrow academic specialty, but by diverse scholarly disciplines (educational theory, workforce policy analysis, psychology, and by scholars in science and engineering themselves),  and by researchers from a huge range of institutions. Their sheer numbers add up to a powerful message for those who are willing to hear it: Day-to-day life in American classrooms and workplaces involves a constant stream of presumptions about the inborn capacities and desires of people of different identities.

There is no subtlety in the way these presumptions work to disadvantage certain groups. That’s clear  from the facts recounted in the article and broadcast, even if you don’t read the deeply disturbing collection of reactionary and creepily retrograde comments which follows the article (many referring to women’s innate intellectual disinclination towards science, or characterizing those concerned with these issues as “cry babies”…). What if Bielefeldt, a person who has clearly seen endless dismaying moments of this kind, had faced the microphone and instead of framing the problem as a mysterious social malaise had said instead, “The behavior I see every day  in classrooms, in labs, in administrative offices, and on civil engineering worksites is discriminatory, and unacceptable”?

Crucially, I don’t mean to say I would have done so.  The circumstances in which STEM activism occurs are by definition settings in which we must make our livings; it is terribly difficult to bring blame into the discussion. And, yes, those proverbial flies do prefer honey. More seriously, I deeply appreciate the very constructive (not blameful) cultural critique and pedagogical ideas introduced into the NewsHour discussion by Maria Klawe, president of Harvey Mudd College and a powerful advocate for bringing young women into the sciences. But if Klawe’s suggestions are to take hold in a significant number of educational settings, I want to suggest that in our discussions of the “gender gap,” we have to stop scratching our heads and own up to the dismal social reality revealed by the evidence offered by experts featured on the program, if not their tone.

The take-home: It is the very stuck-ness of Americans around equity issues, the fact of sexisms’ durability, that we need to foreground.  This lack of progress, as Bielefeldt says, is “the important thing to note.”  Unfortunately, her interviewers or their editors consigned that “thing” to the last note of the discussion. We should start our discussions, in the media and in our own institutions,  grasping and declaring this fact, not puzzled in the least.