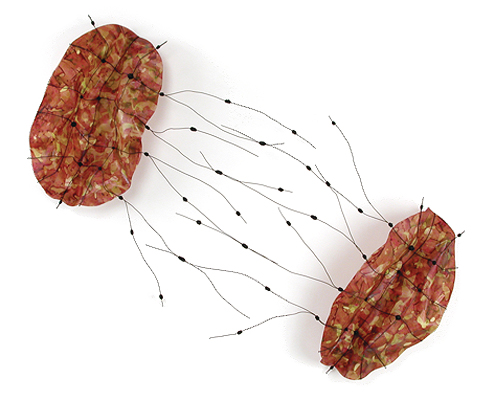 With sudden frequency in the last few weeks, at various STEM-related events  I’ve encountered the idea that arts programming would be a valuable addition to science, technology, engineering and mathematics pedagogy.  If STEM programming  is meant to draw as-yet-uninterested young people into technical occupations, or disinterested taxpayers into supporting science education, STEAM seems intended further to entice these audiences  by highlighting the fun and beauty and sensory adventure inherent in those realms.  In almost every invocation of this kind, the arts are  seen to be synonymous with creativity and innovation.  Science educator Martin Storksdieck, of the National Academy of Sciences, nicely summarizes these aims of STEAM advocates in his post, “STEM or STEAM?”.

Until last night, I hadn’t put a great deal of thought into STEAM. In the interest of full disclosure, let me say that I had a previous career in the fine arts.  Analyzing the claims (both persuasive and not) that educators and curators have historically made for the cultural, societal and intellectual benefits of exposure to the arts felt like something I’d already done a lot of.  Not to mention: my brain has been taxed  just by trying to understand how STEM education is playing out in America; I didn’t feel I could take on STEAM.

But last night, I heard a lecture by an artist committed to STEAM activities that has prompted me to think and blog about this trend. Rebecca Kamen is a sculptor who, among other projects, has been helping high school science students integrate art into their research.   Her career has been spent drawing on science as inspiration for her artwork, often with the support of scientific institutions (as a fellowship recipient or visitor).  She spoke last night at the Philadelphia Area Center for the History of Science (PACHS) about her career, and most recent work with collections of the American Philosophical Society and Chemical Heritage Foundation in Philadelphia.  She was enthusiastic and clearly deeply moved by her encounters with scientific discovery and its depiction. She genuinely seems to wish the same awe-filled and energizing experience for her audiences.  And I left the talk worried about STEAM.

First, let me say that I really like a lot of Kamen’s sculptures. She looks at scientific inscriptions from all eras (say, an ancient Chinese astronomical text or the familiar Periodic Table of the Elements) and renders the forms she sees there as looser, almost organic,  hand-hewn three-dimensional shapes.  With rough surfaces and cartoon-like contours, these quirky objects felt to me, when I first saw them, like the scientific products of a very non-scientific civilization; they are both mysterious and funny, aspiring to credibility in their imitation of meticulous scientific illustrations, and comic in their soft, smeared versions of those formal conventions…. Above all, her sculptures seemed to pastiche all scientific projects throughout  history with equal humor and tenderness, perhaps reminding us that one era’s cutting-edge science is another’s antiquity. Had I not heard her talk, I would have presumed that Kamen’s work was meant to shake up our veneration of science… to remind us that even the most esoteric  and exalted products of human imagination can, in a certain light, assume the naivete of the kindergartener’s  scribble or the expressive urgency of the first cave painting.

Rebecca Kamen, Hive, 2008But in the course of her talk, it became clear that for Kamen,  there is no historical perspective, no irony, no relativism. She told of her “awe and wonder” at the visual representations that have accompanied science through time, and spoke repeatedly of being moved to tears by the “beauty” and “magic” of scientific discovery.  Let’s put aside for today the gap between my initial impressions of the work and the artist’s intentions; it’s her messages about art in the realm of science that I want to examine. 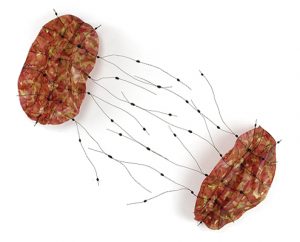 In that unabashed adoration for her sources of inspiration (and by extension, for her patrons), I heard something that bodes ill for STEAM. I fear the injection of arts into STEM teaching may be a way of shutting down criticality about science and technology, and discouraging reflexivity among scientific practitioners (whether students or professionals),  instead bringing the high-culture cache of fine arts to a realm already steeped in privilege and self-congratulation.

A colleague at the talk, Darin Hayton,  was troubled by Kamen’s historical errors, such as the mischaracterization of the scientific illustrations she celebrated.  (You can read his own blog post about it here.) A number of these  errors were obvious to the historians of science in the room with knowledge of the periods and practices to which Kamen referred. For Hayton, those errors point to Kamen’s elision of the  literary strategies and political conditions that have historically brought science into its authoritative cultural position. Another colleague, by contrast, felt that this artist simply, “Makes her own context.”  True enough, but I think that is exactly what worries me about Kamen’s program.  I think in putting historical and cultural specificity out of sight, Kamen discourages us from questioning how science deploys beauty for its own ends, or how our very notions of beauty (or  “genius” or “creativity”) arise from contingent cultural conditions…conditions with important social ramifications.

For over 200 years in America,  we’ve heard arguments for the automatically humanizing, not to say democratizing,  effects of bringing artists into scientific and technological realms.  But more often than not,  this “collaboration” has served to flatter and elevate science and technology.  In its more critical forms, art has rarely been welcomed into  the science museum, corporate headquarters,  or (I suspect) STEM curriculum.  One major exception, well worth revisiting online,  was the 2008 “Molecules that Matter” show, curated at Skidmore  College in partnership  with (and displayed at), the Chemical Heritage Foundation, a setting which has often shown far less provocative art-about-science.

In that show, the uncertain and even disturbing social features of science were displayed alongside the lovely and enticing. Many more wonderfully challenging art works about science and technology, sometimes created in collaboration with non-artists, are readily found in art studios, galleries and museums. If STEM is really to open its constituent disciplines  to more equitable, more self-critical practices, awestruck adoration of science and technology  is the last thing we need.  That’s what science too often provides for itself. Instead we should be asking: For whom is science beautiful, and why, in a culture? Who gets to say what beauty is? Whose voices go unheard? In short: We need the disruptive, transgressive,  or at least, open inquiry that art can bring to its subjects, not its flattery.