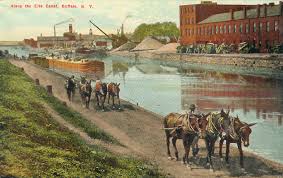 It’s official:  “Innovation” is going viral among  American politicians.  “Yankee ingenuity” is back, with a vengeance.  Our famous inventive spirit will beat back all comers in the quickening global race for economic dominance. Brainpower is the new horsepower.

I’m now completely convinced that the anxiety/enthusiasm recipe I wrote about below (wherein we are reminded by our civic leaders that high-tech innovation will preserve our global economic  leadership as China “threatens” our superpower standing) will not be displaced any time soon by “Trickle-Down Economics”, “Family Values”, “Homeland Security” or any other off-the-shelf schemes for regaining our global groove. “Science” it is.

It was reading Mayor Bloomberg’s recent speech  (reprised in his comments last Sunday on “Meet the Press”)   that solidified this impression for me:

Throughout American history, innovations combined with government investment have created fundamental and lasting structural changes to the economy that spurred new private sector investment, new jobs, and new prosperity for the country. For instance, after the financial panic of 1819, it was New York Governor DeWitt Clinton who built the Erie Canal – ushering in a new era of westward development and growth. In the 1860s, with the Civil War tearing the country in two, Lincoln’s transcontinental railroad set the stage for America to fulfill its manifest destiny, by opening new markets and allowing private sector innovations – in industries like steel and oil – to drive a new era of national growth. When the country was seemingly near collapse in 1907, it wasn’t long before people like Henry Ford pioneered mass production techniques that ushered in a new age of industrial growth, with government building new roads, bridges, and tunnels to support it. –Mayor Bloomberg, Dec. 8, 2010

Put aside for a minute the rather confusing mash-up of Big Government/Small Government ideologies here.  What bothers me is Mr. Bloomberg’s selective use of history… Partly because  uncritical references to  Henry Ford’s management practices make me shudder, but also because Bloomberg  blithely assures us that there is nothing wrong with this nation that a good transcontinental railroad or Model T Ford can’t fix.

Problem is….the Erie Canal, coast-to-coast rail systems, Detroit’s auto industry, and even the electronics boom of the 1960s arose in political conditions very different from those in which we live today. Those were eras in which not all, but the majority of productive enterprises stayed on our shores.  It wasn’t only roads, canals and mines that (of necessity) used local workforces, but most industrial operations.

Whether it was the strength of labor unions or of the Soviet Union, or the pull of some other cultural commitments (like Ford’s notorious xenophobia, perhaps?), that impelled  U.S. manufacturers to employ primarily U.S. residents, the country’s producers did not chase low wages around the planet with the same vigor or impunity we see today.  Motorola and Xerox had not yet shifted so completely to seeing other nations as sources for (lower-priced) engineering and assembly personnel, a labor-demand-and-supply trend that has solidified in recent decades. And, my sociologist colleague Mary Ebeling reminds us,  satellite communications and the Internet had not yet fortified  that trend with massively expanded abilities to instantaneously transfer commercial information between continents.

By contrast, in the last twenty years,  the manufacturing spin-offs of Silicon Valley and the emerging biotech sector have grown in a culture of legitimized global outsourcing; there’s not a lot of evidence that any scale-up to come in nano arenas will reverse this pattern.  Jobs for Americans simply can’t be said to be the number one priority of high-tech U.S. manufacturers today.

As Ian Fletcher said of our current trade policies, in an interview with Michael Hughes on the same day as Bloomberg’s speech:

What works on the level of the individual company is a net loss for the economy as a whole.

Let’s be clear:  historical continuities also plays a role in this pattern. Despite a growing body of labor law and expanded workers’ rights since Bloomberg’s economic blast-off date of 1819,  especially over the first half of the 20th century, the concentration of wealth continues to skew towards the nation’s richest citizens year after year, as Gus Lubin nicely summarizes. Real redistributions of economic opportunity don’t drive American industrial expansion today any more than they did in Henry Ford’s era.

For example: Last week at a meeting of folks interested in nanotech innovation,  I heard a corporate R&D director, from a hugely successful high-tech firm,  actually acknowledge that lowered wage structures in non-US countries make it hard for cutting-edge American companies to move discoveries from lab bench to scaled-up commercialization;  US companies, he warned,  can’t compete with high-tech research operations in Chinese and Indian firms, let alone with production operations in those countries. Yet, his answer to this problem? Not a new look at the American free trade policies that have incentivized outsourcing, but lower corporate taxes for American firms.

In Mr. Bloomberg’s cyclorama of American invention, a new national drive for scientific and technical innovation is, I think, sincerely intended to inspire energetic and creative activity and useful new products, welcome medical and energy innovations among them.  But his happy vision of a bustling populace, some boiling over with new ideas while others, presumably,  use their brawn to make those inventions, tactically ignores alot of history.  His epic 200-year timeline leaves out today’s institutionalized disconnect between industrial innovation and employment in the United States, and reinforces the economic privileges that have long accrued to successful American business owners and investors.

Only in such artful  narratives as Mayor Bloomberg’s, selective and reductive as they are, would the Erie Canal and transcontinental railroad offer lessons for technical innovation today.  I’m no historian… hey, wait, actually, I AM a historian, and Mr. Bloomberg, these strategic, misleading invocations of past events serve us all poorly.