Huts; or, The Impossible Innocence of Science

How can we vigorously defend the nation against rising anti-science sentiments and policies while remaining deeply critical of the violent, racist history of science? A first step might be to stop letting the right set the terms of debate as pro- vs. anti-science.

Within a day or two of Trump’s outrageous assertion the other week that Nigerians upon visiting the United States would be unwilling to return to “their huts in Africa”—part of his profoundly racist case for restricting US immigration — I visited the Whipple Museum at Cambridge University to see “Astronomy & Empire.” That small but incisive exhibition has a lot to tell us about such imagined huts, occupied by “natives” across the “Dark Continent” and other colonially envisioned landscapes. In the 19th century, images of these supposedly crude dwellings were part of the backdrop for Victorian astronomical expeditions to distant colonial outposts. When British amateurs, scientists, and military personnel traveled to observe eclipses and other astronomical events with their trunks full of charts, scientific instruments and silver tea services they exploited the labor and knowledge of indigenous people; disdained those skills while deploying them; and generally treated non-British, non-white people as irredeemably backward.

It’s old news that Trump maintains 19th century Eurocentric beliefs about race and nationality, about non-white people as innately backward and non-compliant.  He and his followers shun knowledge that contradicts these and other bigoted notions, casting science and intellectual effort in general as the mere trickery of elites. But my not-so-coincidental encounters with an imagined Africa last week (could worry about the UK’s own recent anti-immigrant zeal have inspired the Whipple’s curators?) also reminded me that we need to be cautious in saying that scientific observation and the veneration of empiricism naturally counter racism and racial violence. One point of the Whipple’s presentation, garnered from postcolonial scholarship, is that racialized imperial attitudes were not regrettable side notes to British astronomical investigations but integral to those scientific efforts, constituting a world that promised white, European thinkers mastery over natural phenomena and colonial subjects alike.  Cutting-edge science was essential to past racial conflict and oppression. It is also, as many recognize, not remotely innocent today.

The complex critical literature on race and genomic sciences makes clear that fearsome scientific engagements with race have persisted into the present day, well beyond eugenics, not to mention beyond the brutalities of early gynecological research on enslaved women and the horrors of Tuskegee. Traditional IQ testing and new facial recognition software that “detects” sexuality are two among many examples of sciences involved today in making other sorts of pernicious human distinctions. But it is not merely certain episodes of scientific work that remain discriminatory in the 21st century. Rather, there is a general character lent to science that we may need to challenge if we are to confront racism, homophobia, sexism, and ableism; that is the incipient notion of science, engineering, mathematics and other technical enterprises, and social sciences when done honestly and expertly as naturally serving democracy. Historians and STS scholars have of course shown that this is not so, have shown that where empiricism goes so go politicized subjectivities, sometimes liberatory and often not. So we need to insist now on wider terms of debate regarding our thinking about nature than simply whether that thinking is “’evidence-based’ or not”—these are terms that the right has set for us.

For example, the White House appears to have issued a prohibition against that particular term and six others appearing in CDC materials. On hearing this I instantly rage-ordered a t-shirt. 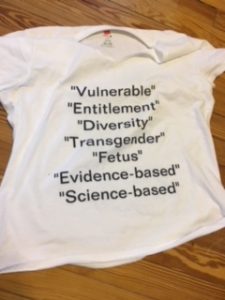 But here’s the problem with my t-shirt: When we declare evidence and facts as a protected class of knowledge, even in trying to defend democracy, we are letting Trump and his followers foreclose deep reflection about power and knowledge. Their crass invocations of hut-dwelling Africans or opportunistic denials of climate change are hugely selfish and willfully naive. In our attempts to contend with such vile rhetoric, we face binaries of fact/non-fact, evidence/no evidence, science/no science …and the temptation to associate an emancipatory sensibility with the former.  Understandable. But these seemingly actionable binaries we construct in our anxiety and rage are problematic if we are hoping to bring change. As my friend Tiago Saraiva has put it, while Marching for Science we need to be clear for which Science we are marching.

The British astronomers’ systematic observation of nature, instrumentation, and calibration—and not least their embrace of precision—promised them intellectual mastery and those commitments do no less or more for us today. The knowable, findable features of nature are the stuff of science but that has historically been a nature that suits that purposes of the epistemically/racially dominant (see my last post, below). So we need always to ask not just “mastery of what, and thereby of whom?” but also, “why mastery?”  Even adhering to the “rigorous/non-rigorous-science” binary can obfuscate power and keep us from asking: What voices and institutions can be imagined as rigorous in scientific and technical situations? Are or are not Flint citizens, Grenfell Tower residents, Haitian public health researchers, disabled or transgender people, eligible for ascriptions of observational credence?

Robyn Wiegman has helped articulate how white supremacy achieved its cultural robustness in the US through a combination of universal claims (naturalizing a categorical system in which all humans have a place: ie, a race) and particularity (being white has meant claiming exemplary traits and access to restricted experiences). I would say that such simultaneous attention to the monolithic and the local, the production of theories and evidence, has also made empiricism and scientific inquiry uniquely powerful cultural instrumentalities for those seeking domination over others. Whether and how these instrumentalities can serve other purposes—empowering marginalized communities, inciting reflection and reform among the dominant—seems an important question in the age of Trump. In short; Let’s keep marching for science in 2018, against censorship and defunding and racism, but be accountable to the history of science as we march.